Steve is married to Kathy (Olsen), and they have 2 children and 2 grandchildren. He has been a coowner of Olsen’s For Healthy Animals since 1980 and along with Kathy, established the Olsen’s location in Prescott. Previous to 1980, he spent 7 years with Carnation Company in retail grocery products sales and management.

He views community service as an extremely important way to “give back”. He has been a member of Prescott Frontier Rotary since 1980 and has served in key leadership positions with that organization, as well as: Boy Scouts of America, Rotary Youth Leadership Awards, Central Arizona Partnership, and Yavapai Regional Medical Center. Steve is a big fan of Yavapai Big Brothers/Big Sisters, Yavapai Humane Society, United Animal Friends, Frontier Rotary Summer Reading and Math Clinic and Catholic Charities.

He has also been very involved since 1989 with Prescott Center for the Arts, performing in main stage plays and musical reviews, and is an active member of Sacred Heart Catholic Church. He was also a member of Class 2 of Project CENTRL (Center for Rural Leadership). In 2011, he and his wife Kathy and were named Co-Citizens of the Year by the Yavapai County Sheriff”s Office.

When he finds the time, he likes to ride his motorcycle, hike, snowboard, golf, play acoustic guitar, and be a kid again with the grand kids. Being part of the Prescott City Council is an excellent way to make a positive difference in the city he loves. 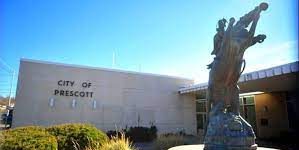