Prescott’s legislative body consists of one Mayor and six City Council members who are elected at large. The Mayor serves a two-year term and Council members serve overlapping four-year terms.

Questions regarding Prescott city elections should be directed to Sarah Siep, Prescott City Clerk, at 777-1272 or via email at sarah.siep@prescott-az.gov

Register to vote online at:

To be eligible to vote in a City of Prescott Election:

UNS Gas, Inc. has submitted a proposed franchise to the City of Prescott for the purpose of supplying natural gas to the citizens of Prescott. The City Council has found that the issuance of the franchise will benefit the community. A franchise is subject to voter approval, pursuant to ARS 9-501 and the Prescott City Charter, Article XII Section I. This means a majority of qualified voters of the City of Prescott must authorize the granting of a franchise before the City of Prescott can enter into a new agreement. If approved, UNS Gas will be granted a new 25-year franchise to use the City’s rights-of-way to construct, operate, and maintain facilities for the handling, production, transporting, storing, sale and distribution of natural gas. 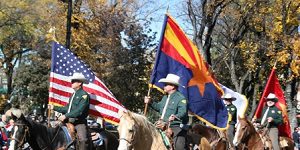 The City of Prescott is excited to announce that the 2021 Veterans Day Parade will be held in Downtown Prescott on Thursday, November 11, 2021. Opening ceremonies will take place at 10:30am on the stage at the intersection of Cortez… Read more »